Arrive in Style in Castleford in one of our modern Superstretch Limousines.

Castleford is built upon the site of a Roman army settlement that was named Lagentium or Legioleum. Funeral urns dating from the time of the Romans have been found there. The modern name of the town is derived from the fort, Castle (referring to the fort) and Ford (referring to the River Aire which runs through Castleford.)

Queens Park in Castleford as viewed from Google earth, shows two circles on the top playing field area, which could potentially be the remnants of round houses used by early Anglo Saxons. Standing over 250 feet above sea level, it is thought that the area which is Queens Park today would have offered a defensive view of the settlement.

Oliver Cromwell (1597–1659), had a local encampment in nearby Ferrybridge. It is said locally that his cannons faced towards Pontefract Castle from the nearby Redhill Plateau in Castleford. Today this plateau includes the areas of Holywell Wood, the estate of Airedale and Queens Park.

In the Castleford area we provide limo hire for any occasion, whether you are going to the Xscape complex or simply a means of getting from A to B in Castleford in comfort and style.

We supply Limousines for Aniversaries, Castleford Restaurants, Castleford Clubs and Pubs and hotels. We can also offer a shuttle service to transfer guests to and from specal events. Castleford Birthday Parties, Castleford School Proms, Race Meetings by Limo to Doncaster Races, York Races, Pontefract Races or make it a full day out at Royal Ascot. Shopping trips to Sheffield Meadowhall or Manchester Trafford Centre.

We offer a selection of limousines in Castleford. You can view recent photos of our limos on this site. These are our actual limos, available for you to hire in the Castleford Area. Remember, some limo operators use borrowed photos and show different angles of the same limo to give a false impression. Ask questions to make sure you get what you expect.

Travel in Luxury, Arrive in Style! 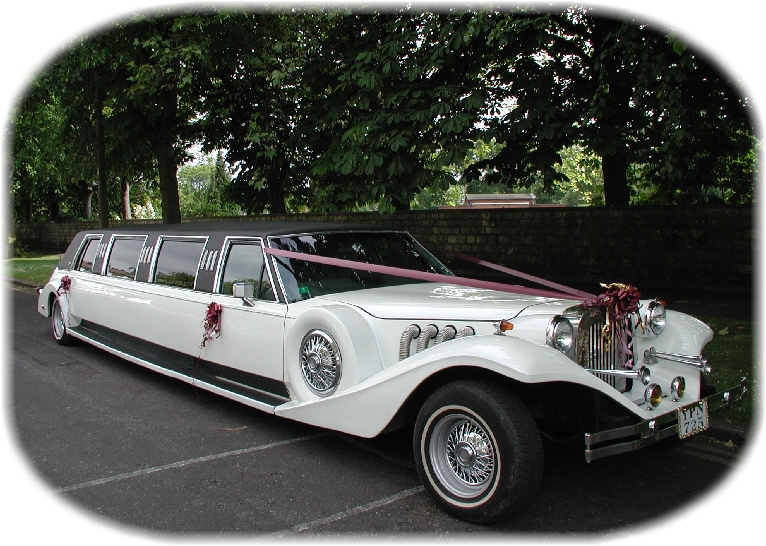 Excalibur limousine  for hire in Castleford and surrounding area for weddings and  special occasions.

This limousine has 1930's styling and seats 8 passengers.

Want to be different?

Want to make everyone look?

Stand out from the crowd with our "exclusive"
Excalibur Superstretch Limousine.

Limo hire in the Yorkshire area.